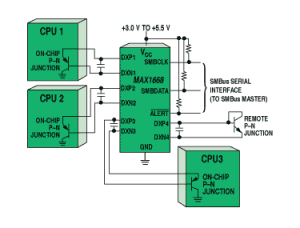 When you set out to select a temperature sensor, you are no longer limited to either an analog-output or a digital-output device. There is now a broad selection of sensor types, one of which should match your system’s needs.

When asked what I do for a living, I tell people I’m an analog electronics engineer. When next asked, “What does ‘analog’ mean?” I often use temperature sensors to explain the concept. I tell them that we engineers sometimes use sensors that give an analog of temperature in the form of voltage or current. To further define the analog world, I contrast it with the digital realm by saying that the voltage or current signals are usually converted to 1s and 0s so that computers can use the information. Sometimes this explanation suffices; sometimes it doesn’t.

Thus, when higher levels of integration became feasible, temperature sensors with digital interfaces became available. These ICs are sold in a variety of forms, from simple devices that signal when a specific temperature has been exceeded to those that report both remote and local temperatures while providing warnings at programmed temperature settings. The choice now isn’t simply between analog-output and digital-output sensors; there is a broad range of sensor types from which to choose.