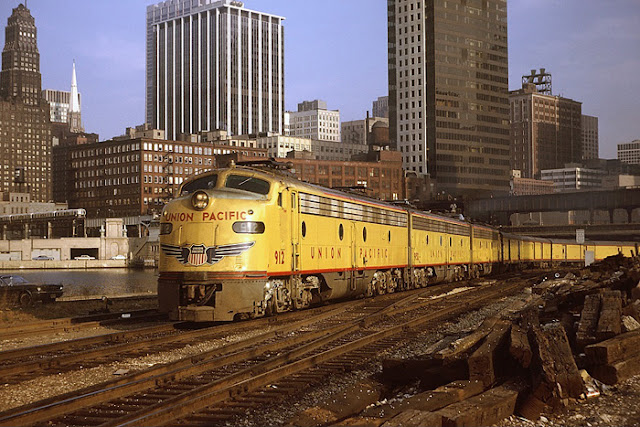 
In early 1971, Amtrak’s arrival became more and more definite. Finally, the date for transitioning most of the U.S.’s private intercity trains to the new government-sponsored service was set: May 1. Since a number of routes and services weren’t going to survive the changeover, this led to the desire to see, photograph and ride on as many of the soon-to-be retirees as possible. Fortunately, I was situated in Chicago, with a graduate school schedule that allowed a modest amount of flexibility to carry out these ambitions (although the money to take trips and pay for film and processing was another matter!).

One of the more famous trains that was about to vanish was the sole remnant of the Union Pacific’s fleet of “City” trains, which now was operated by the Milwaukee Road between Omaha, Nebraska and the Windy City. Referred to by fans as the “City of Everything”, it represented the one-time “City of” Los Angeles, Denver, San Francisco and Portland, not to mention the all-coach “Challenger”, depending on which day of the week it was, since some of the services were tri-weekly (although Los Angeles was daily).


Not that the Milwaukee Road E units in Armour Yellow and Harbor Mist Gray didn’t look good, but there was something missing without the UP units on the head end. A ride out to Savannah, Illinois (and back on Burlington Northern’s “Afternoon Zephyr”) two days before the last run had the train fronted by MILW units; in fairness, they performed competently (as did the single former CB&Q E on the return). The next afternoon, Amtrak Day minus-2, one of the MILW units at the head of the “Cities” even showed up, incongruously, in fresh paint.

The “final” day, hordes of railfans pursued their “last looks” at various points around Chicago. Since the lighting along Canal Street north of Union Station was good for the late-afternoon departure of the last through train destined for the west coast via the UP route, a considerable crowd gathered in wait. Shortly, the photo line was greeted by Union Pacific 912 and two UP sisters, growling smoothly as they advanced the westbound “Cities” for the final time. The real thing -- the genuine article -- had returned, as if for a final curtain call!