pictured: The heartbreaking image of a dying U.S. marine that has reignited American divisions over the Afghan war

Pictured: The heartbreaking image of a dying U.S. marine that has reignited American divisions over the Afghan war
By
Daily Mail Reporter


It is a deeply disturbing image which depicts the grim reality of war - a fatally wounded U.S. soldier lies slumped in the mud as fellow marines desperately try to save him as his young life ebbs away.
But the release of the picture by a news agency in the U.S., which went against the wishes of the victim's family, has sparked a furious debate which has divided a nation.
The grim photograph shows Lance Corporal Joshua 'Bernie' Bernard, 21, shortly after he was struck by a rocket-propelled grenade during a Taliban ambush of his squad last month in Dahaneh, Afghanistan. 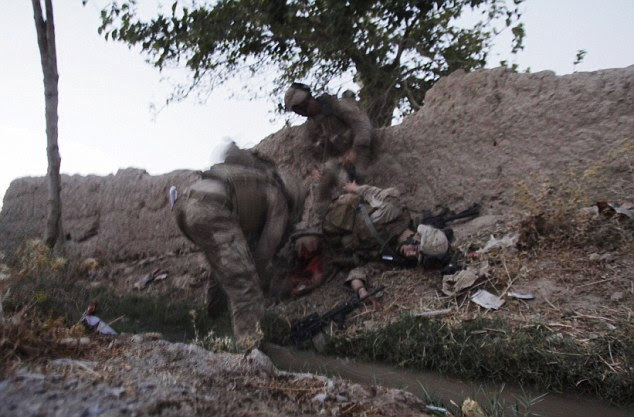 Grim: Soldier Joshua Bernard is tended to by fellow U.S. Marines after being hit by a rocket propelled grenade during a firefight against the Taliban in the village of Dahaneh in the Helmand Province of Afghanistan.
It shows Bernard, 21, of New Portland, Maine, lying mortally wounded with one leg blown off and another badly mangled as his colleagues try in vain to save him.
The U.S. defence secretary, Robert Gates, condemned the decision by the news agency Associated Press to publish the graphic photograph after Bernard was killed in Afghanistan.
In a scathing letter to Tom Curley, president and chief executive of the AP, Gates said the decision was 'appalling', saying it was a matter of 'judgment and common decency' not to publish the photo.
Gates wrote in the letter: 'I cannot imagine the pain and suffering Lance Corporal Bernard's death has caused his family.
'Why your organisation would purposely defy the family's wishes knowing full well that it will lead to yet more anguish is beyond me.
'Your lack of compassion and common sense in choosing to put this image of their maimed and stricken child on the front page of multiple newspapers is appalling.'

Moments from death: Joshua Bernard patrols on point through the bazaar in the village of Dahaneh in the Helmand Province of Afghanistan. Less than an hour later he was killed in a Taliban ambush

However, AP has defended the decision, which editors said they made only after careful review and sharing the pictures with the family.
The news agency said it decided 'to make public an image that conveys the grimness of war and the sacrifice of young men and women fighting it'.
The publication of the image has reignited debate in the U.S. about the sanitisation of war at a critical time for the military offensive.
It has dealt a further blow to U.S. President Barack Obama, with support for the war in Afghanistan  dwindling with the wavering American public.
The President has already warned this weekend that any attempts to send more U.S. troops to the conflict is likely to be met with resistance in Congress.
The publication of such dramatic images has been relatively rare, but critics are likely to use it to draw comparisons with the Vietnam war, to suggest that the conflict in Afghanistan is unwinnable.

Silent tribute: U.S. Marine Corporal Braxton Russell pays his respects to Lance Cpl. Bernard during a memorial service in Afghanistan
The photograph was part of a package of articles and photographs about Lance Cpl. Bernard and his unit, which was ambushed in Afghanistan on August 14.
Before sending the package to its newspaper clients, AP sent a reporter to Maine to talk with the victim's family 'out of respect', said Michael Oreskes, AP's senior managing editor.
But the father, John, a former Marine, asked the newswire not to publish the picture, saying it would only hurt the family more.
In an advisory to clients, AP said its articles and photographs 'offered vivid insights' into how the battle was fought, and into Bernard's character and background.
After the articles and pictures had been distributed but before they were published, Gates called Curley to beseech him to change his mind.
'I am begging you to defer to the wishes of the family,' Gates said, according to his spokesman. Shortly after hanging up, Gates sent his letter.

Last respects: U.S. Marine Lt. Jake Godby pays his respects to Lance Cpl. Bernard during a memorial service
However, AP distributed the picture AP distributed the picture despite personal pleas from Gates and the dead Marine's family in a case that illustrated the difficult decisions in reporting on a conflict where Americans have seen relatively few images of fallen U.S. troops over eight years.
The picture, by AP photographer Julie Jacobson, shows Lance Cpl. Joshua 'Bernie' Bernard, lying on the ground with severe leg injuries after being struck by a grenade in an ambush on August 14, his fellow Marines tending to him.
Bernard was airlifted to the U.S. Camp Leatherneck but died of his wounds. 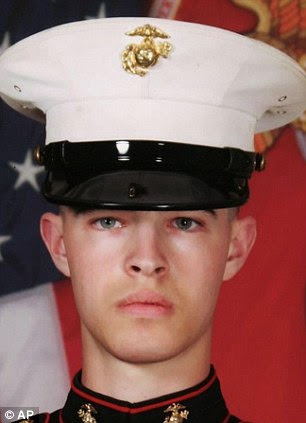 Tragic: US Marine Lance Cpl. Joshua Bernard was the 19th US soldier to die in Afghanistan in August

He was the 19th American to lose his life in Helmand that month during a bloody month for U.S. and British forces.
After the photo was published on Friday, the Pentagon released its communications with the AP.
John Daniszewski, AP senior managing editor, said he respected Gates' view but that sometimes the government and press have different perspectives.
'We thought that the image told a story of sacrifice; it told a story of bravery,' Daniszewski said.
'We felt that the picture told a story that people needed to see and be aware of.'
Jacobson and reporter Alfred de Montesquiou were embedded with Bernard's unit and had followed them on patrol in Dahaneh, Afghanistan.
She took her pictures from a distance using a long lens. The AP on Thursday ran a package of photos from that day and others that showed his life in uniform and his memorial service.
The AP also distributed a detailed story, accompanied by the photographer's journal and an article explaining why the photo was used.
Gates' plea came after the story and photo were sent on the wire but before the time set for releasing the package for publication.
The AP had sent the photo as part of its package of stories and photographs under this 'embargo' to give editors and producers time to consider whether to use the photo of the fallen Marine, the organisation said.
Gates wrote that use of the photo of a wounded Bernard would mark an 'unconscionable departure' from the restraint that most journalists have shown in covering the military since the September 11, 2001 terrorist attacks.
However, The AP did not change its decision. The picture and story appeared on at least 20 newspaper front pages on Friday.
None used the picture of a mortally wounded Bernard on the front page, although it was used inside newspapers and on websites like the Huffington Post.
The Newark, New Jersey, Star-Ledger ran a picture of Bernard's memorial service on its front page and the ambush picture inside. 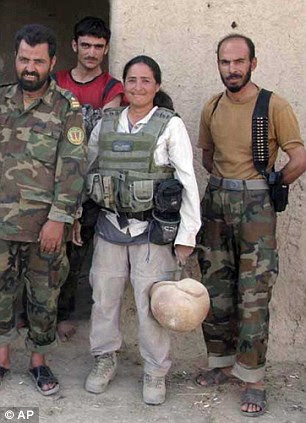 Battle lines: Associated Press photographer Julie Jacobson, (centre) standing with unidentified members of the Afghan National Army.
Editor Jim Willse said it was 'not a difficult decision for us', and said it would have run the ambush picture out front 'if the story had been presented differently'.
The Wheeling, West Virginia, Intelligencer ran the photo inside and an editorial explaining why it did 'after hours of debate.'
'Too often, we fear, some Americans see only the statistics, the casualty counts released by the Department of Defense,' the newspaper wrote.
'We believe it is important for all of us to understand that behind the numbers are real men and women, sometimes making the ultimate sacrifice, for us.'
The Portland (Maine) Press-Herald ran an editor's note with the story saying it had received the photo but believed it would be in 'poor taste' to publish it. Bernard was raised in New Portland, Maine.
While the story was being written, an AP reporter visited the home of John and Sharon Bernard to learn more about their son.
The couple was shown Jacobson's pictures, and requested that they not be used.
In a later fact-checking phone call, John Bernard asked in stronger terms that the photos not be used, Daniszewski said.
Although the family was shown the pictures ahead of time as a courtesy, 'we did not ask permission' to use them, Daniszewski said.
'There was no question that the photo had news value,' he said. 'But we also were very aware the family wished for the picture not to be seen.
'That created a difficult choice between our job to document the war and our respect for the suffering of the corporal's family.'
During lengthy internal discussions, the family issue was the most difficult, he said. Ultimately, the AP concluded that 'the photo itself is a part of the war we needed to cover and convey'.

On a mission: U.S. Marine Cpl. Braxton Russell (left) tells one of his Marines to 'llight it up' if he sees any movement from a pomegranate grove where Taliban fighters are believed to be lying in wait
The son of a retired marine, Bernard was described as a devout Christian, an Iraq war veteran, a keen snowboarder and an avid hiker.
His father, John, described him as a 'humble, shy, unassuming' man who did not smoke or drink and whose main friends were from his church group.
Three weeks before Joshua died, Bernard Snr had written to his congressman expressing frustration at what he said was a change in the rules of engagement to spare civilians, calling the move 'disgraceful, immoral and fatal' to American forces in combat.
Asked to sum up his son, John Bernard suggested the words 'service and personal honour'.
However, as America continues to debate the use of his image, Joshua Bernard has now come to symbolise the suffering inflicted on America's sons and daughters in uniform, and the unease of fellow citizens forced to confront the grim truth about their deaths.
Posted by ghulam sarwar at 8:51 PM
Email ThisBlogThis!Share to TwitterShare to FacebookShare to Pinterest
Labels: news